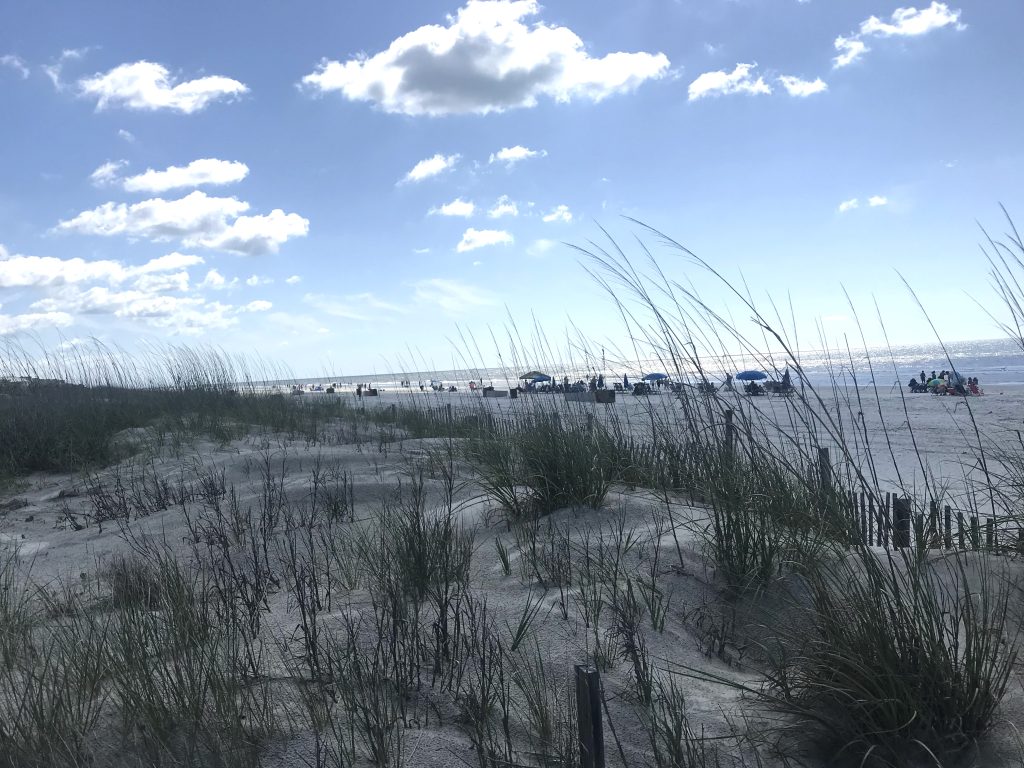 St. Simons Island is part of a cluster of barrier islands and marsh hammocks between the Altamaha River delta to the north, and St. Simons Sound to the south. Sea Island forms the eastern edge of this cluster, with Little St. Simons on the north, and the marshes of Glynn plus the Intracoastal Waterway to the west.

St. Simons is located midway between Savannah, Georgia and Jacksonville, Florida, and approximately 12 miles east of Brunswick, Georgia, the sole municipality in Glynn County and the county government seat. According to the United States Census Bureau, the CDP has a total area of 17.7 square miles, 15.9 square miles of which is land and 1.7 square miles of it (10 percent) is water.

Like most barrier islands, St. Simons Island beaches are constantly shifting as tides, wind and storms move tons of sand annually. The dunes, which are home to sea oats and morning glories shift as well, but do an important part to protect the beaches.

The Köppen Climate Classification System rates the climate of St. Simons Island as humid subtropical. Ocean breezes tend to moderate the island climate, as compared to the nearby mainland. Daytime mean highs in winter range from 61 to 68 °F, with nighttime lows averaging 43 to 52 °F. Summertime mean highs are 88 to 90 °F, with average lows 73 to 75 °F . Average rainfall is 45 inches per year. Rainfall is greatest in August and September, when passing afternoon thunderstorms are typical. Accumulation of snow/ice is extremely rare. The last recorded snow on St. Simons was in 1989.

On St. Simons Island, a diverse and complex ecology exists alongside residential and commercial development. The island shares many features common to the chain of sea islands along the southeastern coast. These include its sandy beaches on the ocean side, marshes to the west and maritime forests inland. Despite centuries of agriculture and development, a canopy of live oaks and other hardwoods draped in Spanish moss continues to shade much of the island. The abundance of food provided by the marshes, estuaries and vegetation attracts a varied assortment of wildlife on land, sea and in the air.

Along the shore and marshes, an extensive variety of both native and migratory shorebirds can be seen year-round.

The area surrounding St. Simons Island is an important stopover for migrating shorebirds. These birds travel between South America and their spawning grounds in the Canadian arctic. As a result of all this avian activity, Gould’s Inlet and East Beach on St. Simons Island is a designated stop on the Colonial Coast Birding Trail.

Commonly sighted land and amphibious animals include white-tailed deer, marsh rabbits, raccoons, minks, alligators, armadillos, terrapins and frogs. The waters off St. Simons Island are likewise home to a great variety of sea life, including dolphins, right whales, a wide diversity of gamefish and the occasional manatee. On late spring and summer nights, loggerhead sea turtles arrive on the beach to lay their eggs. Nests are monitored and protected by area naturalists, and guided turtle walks are available. Shrimping is still important to the region, and shrimp boats are often seen just off the beaches.