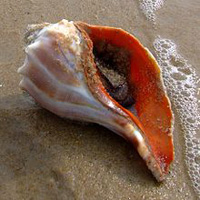 Georgia State Shell: The Knobbed Whelk, Busycon carica, is a species of very large predatory sea snail. In the USA, a whelk, a marine gastropod mollusk in the family Buccinidae, the busycon whelks. The knobbed whelk is the second largest species of busycon whelk, ranging in size up to 12 inches. The shell of the knobbed whelk is dextral, or right-handed. If the shell is held in front of the viewer, with the spiral end up and the opening facing the viewer, the opening will be on the right side. The shell is thick and strong and has six clockwise coils. Fine striations sculpt its surface.

There is a ring of knob-like projections protruding from the widest part of the coil. The color is ivory or pale gray and the large aperture (the inside of the opening) is orange.

Georgia State Butterfly: The Eastern Tiger Swallowtail (Papilio glaucus) is a species of swallowtail butterfly native to North America. It is one of the most familiar butterflies in the eastern United States, where it is common in many different habitats. It flies from spring to fall, during which it produces two to three broods. Adults feed on the nectar of many species of flowers, mostly from those of the Apocynaceae, Asteraceae, and Fabaceae families.

Papilio glaucus has a wingspan measuring 3 to 5.5 inch. The male is yellow with four black “tiger stripes” on each fore wing. Females may be either yellow or black, making them dimorphic. The yellow morph is similar to the male, but with a conspicuous band of blue spots along the hindwind, while the dark morph is almost completely black.

Georgia State Insect: Honey bees (or honeybees) are a subset of bees in the genus Apis, primarily distinguished by the production and storage of honey and the construction of perennial, colonial nests out of wax. They are the only extant members of the tribe Apini, all in the genus Apis. Honey bees represent only a small fraction of the approximately 20,000 known species of bees. Some other types of related bees produce and store honey. Only members of the genus Apis are true honey bees.

Georgia State Crop: The Peanut, or groundnut (Arachis hypogaea), is a species in the legume or “bean” family (Fabaceae). The peanut was probably first domesticated and cultivated in the valleys of Paraguay. It is an annual herbaceous plant growing 1.0 to 1.6 ft. tall. The leaves are opposite, pinnate with four leaflets (two opposite pairs; no terminal leaflet), each leaflet is ⅜ to 2¾ inch long and ⅜ to 1 inch broad.

Georgia State Fruit: The Peach, Prunus persica, is a deciduous tree, native to China and South Asia, where it was first cultivated. It bears an edible juicy fruit also called a peach. The species name persica refers to its widespread cultivation in Persia. It belongs to the genus Prunus which includes the cherry and plum, in the family Rosaceae. The peach is classified with the almond in the subgenus Amygdalus, distinguished from the other subgenera by the corrugated seed shell.

Georgia State Flower: Cherokee Rose (Rosa laevigata) is a white, fragrant rose native to southern China and Taiwan and southeast Asia. It is an evergreen climbing shrub, scrambling over other shrubs and small trees to heights of up to 16–33 ft. The leaves are 1.2–3.9 inches long, with usually three leaflets, sometimes five leaflets, bright glossy green and glabrous. The flowers are 2.4–3.9 inch diameter, fragrant, with pure white petals and yellow stamens. The flower stem is also very bristly.

Georgia State Wildflower: Azalea (disambiguation). Azaleas (pron.: /əˈzeɪliə/) are flowering shrubs comprising two of the eight subgenera of the genus Rhododendron, Tsutsuji (evergreen) and Pentanthera (deciduous). Azaleas bloom in spring in the Northern hemisphere and in winter in the Southern hemisphere, their flowers often lasting several weeks. Shade tolerant, they prefer living near or under trees.

Georgia State Dance: Square Dancing, a dance for four couples (eight dancers) arranged in a square. Each couple takes a side, facing the middle of the square. Square dances were first documented in 17th century England but were also quite common in France and throughout Europe. They came to North America with the European settlers and have undergone considerable development there. In some countries and regions, through preservation and repetition, square dances have attained the status of a folk dance. The Western American square dance is the most widely known form worldwide except dances from China and India.

Georgia State Prepared Food: Grits refers to a ground-corn food of Native American origin, common in the Southern United States and mainly eaten at breakfast. Alkali-treated corn known as hominy make up modern grits. Grits are similar to other thick maize-based porridges from around the world such as polenta or the thinner farina. “Instant grits” use processing to speed cooking. The word “grits” derives from the Old English word “grytt,” meaning coarse meal. This word originally referred to wheat and other porridges now known as groats in parts of the U.K.