Here is the story of how the original sweet onion was developed in America beginning in the 1930’s until today: 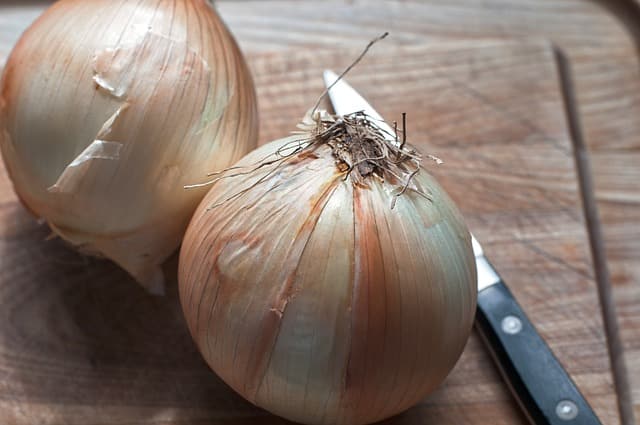 What is now a deeply-entrenched summer tradition started out as a fluke.

During the tough days of the Great Depression, farmers had high hopes of a new cash crop. These hard-working men had grown everything from corn to cotton in Georgia’s sandy soil, and onions seemed to hold some promise of better profits.

Imagine their surprise and concern when what grew was not an instant money-maker but a strange onion that wasn’t hot!

Moses Coleman was one of the Vidalia onion pioneers from Toombs county.

Two key factors came about in the pioneering onion’s early history: a market and a “pig.” Shortly after South Georgia farmers unwittingly planted sweet onions, the state built a farmers’ market in the area.

The new facility was not only located at the hub of several major roads, but also it was almost dead center among the bustling towns of Macon, Augusta, and Savannah. Word of “those sweet onions from Vidalia” began to spread throughout the state, and a name was born.

Soon, people were requesting that their relatives bring along the atypically sweet onions when they visited.

Corporations like the local electric company would pass them along as gifts to their clients. “Vidalias” were destined for greatness!

As fortune would have it, Piggly Wiggly grocery store happened to be headquartered in Vidalia. Recognizing the potential of the peculiar produce, the gentlemen who ran “The Pig” gladly helped farmers from all over the Vidalia area get their newfound sweeties on store shelves.

As their onion began its ascent to national fame, local support soared. Vidalia onions had their own annual festival in Glenville, Georgia by 1977 and in Vidalia, Georgia by 1978, traditions that continues today.

In 1980, the Vidalia mascot—Yumion was born.

By the mid-1980s, farmers united to seek both state and federal protection of the growing region.

In 1990, Vidalia onions became the Official State Vegetable of Georgia.

From the local market in the 1940s to the national super stores of today, the popularity of Vidalia Onions continues to escalate.

No longer just a “southern thing,” Vidalias are available in 50 states and most of Canada.

So, next time you’re on the way to a spring barbeque or summer picnic, pick up a 40-pound bag. They’re as synonymous with these warm seasons as iced tea and watermelon slices!

by Banquet Chef  of The Ritz Carlton, Buckhead, in Atlanta.
Roasting gives Vidalias an even richer flavor in this onion soup

Instructions
Heat the oven to 350 degrees. Butter a 2-quart casserole. In a large bowl combine the chicken, Vidalia Onions, sour cream, soup and cheese. Mix well. Pour into casserole dish.
In a small bowl combine the bread crumbs, melted margarine, and poppy seeds. Mix well. Sprinkle over top of casserole. Bake in preheated oven for 20 to 25 minutes or until the crumbs are golden brown and the filling is bubbly.

Information and recipes provided by The Vidalia® Onion Committee.