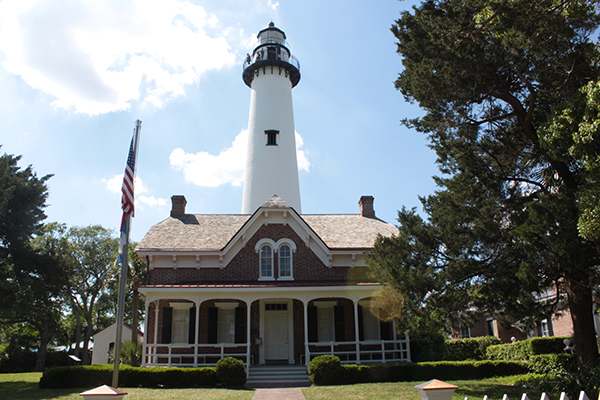 On October 17, 1804, John Couper, a plantation owner on St. Simons Island, deeded four acres of his land, known as “Couper’s Point,” at the south end of the island for one dollar to the Federal government for the construction of a lighthouse. The Treasury Department hired James Gould of Massachusetts in 1807 to build the lighthouse and a one-story frame residence. Original specifications of the lighthouse called for hard brick. However, for economic purposes, most of the material used in the construction was tabby. Tabby is a mixture of oyster shell, lime, sand, and water. The uppermost part used “best northward brick” for materials.

In May 1810 by President Madison appointed James Gould as the first keeper. He held this position at an annual salary of $400 until his 1837 retirement.

In 1857, a third-order, double-convex Fresnel lens was installed that greatly improved the lighthouse’s power and range. During the Civil War, the Macon Artillery troops and six field guns were stationed at Fort Brown to protect St. Simons Sound. In February 1861, Alexander Couper, son of John Couper, wrote to his brother, James, “I went down to the Island to the officers at ‘Fort Brown’–they are comfortably situated in thatched camps. They have built two angles of eighteen-feet base as a breast work. The Fort lies just west of the lighthouse in a corner of Mr. King’s field.” (The Kings were the owners of Retreat Plantation, now the Sea Island Golf Club and Lodge)

During the Civil War, the blockade of Federal ships and the subsequent invasion of Georgia by Federal troops forced the Confederates to evacuate St. Simons Island. Prior to leaving in 1862, the Confederates destroyed Gould’s lighthouse so the Federal forces could not use it as a navigational aid. For the next ten years, Retreat Plantation’s cotton barn served as a navigational reference for ships entering Brunswick harbor. The tall cotton barn was marked on U.S. government maps as “King’s Cotton House.”

The ruins of the first lighthouse were partially excavated by archaeologists during August 1974.

Its boundaries are just south of the oil house where one can see a mound of grass. James Gould probably built a frame house to serve as the home for the lighthouse keeper and his family. No one knows the exact site of that dwelling.

The Second Lighthouse and Keeper’s Dwelling (1872)

The U. S. Government ordered the construction of a second lighthouse. It sat west of the first lighthouse. Charles Cluskey, one of Georgia’s most noted architects, designed the structures. Those consisted of he 104-foot tower, with a 129-step, cast iron spiral staircase and an adjacent keeper’s house.

Cluskey (1805-1871) was one of the most important architects of this period. A native of Ireland, Cluskey worked in Georgia between 1830 and 1847 designing Greek Revival buildings. Later, he served as a consultant in Washington, assisting with renovations of public buildings such as the Capitol. Sent to build a lighthouse on St. Simons Island, Cluskey and some of the crew never saw the fruition of their effort, dying in 1871 of malaria, a year before the structures were completed. Official records of the lighthouse keeper stated in 1874: “This station is very unhealthy, and it is attributed to the stagnant water in several ponds in the vicinity.”

In 1876 the U. S. Lighthouse Establishment performed a “thorough overhauling” at the lighthouse; workers weather-proofed the roof and walls of the dwelling and installed a speaking tube which ran from the watch room in the tower to the house.

The U.S. Lighthouse Establishment household had to be self-sufficient.

The exception was for basic lighthouse supplies such as fuel, paint, ropes, and lighthouse maintenance equipment. The keeper and his assistant shared the dwelling, the keeper’s family living downstairs and the assistant’s upstairs. A central stairway connected the two households. A tower room connected the keeper’s dwelling to the tower. Tempers flared one Sunday morning in March 1880 between the head keeper and his assistant. The argument left the keeper, Frederick Osborne, dead. Legend claims that his footsteps in the tower have been heard by the wives of later keepers.

In 1890, a fire-proof brick oil house was constructed beside the lighthouse. This 9′ x 11′ building could hold 450 five-gallon oil cans. In 1934, electricity replaced the lighthouse kerosene lamp. On June 1, 1939, the U.S. Coast Guard took over jurisdiction of the lighthouse. Twenty years later, timers to turn the light off and onthe lighthouse was fully automated with . The third order Fresnel lens projects the beam eighteen miles. A 1,000 watt mogul lamp operates the lens and rotates to produce one beam per minute.

The lighthouse keeper’s dwelling (1872) is a unique Victorian design.

Architectural details not only enhance the beauty of the structure but draw the eye upward to the tower to the tower. Window moldings and acanthus leaf brackets are of cast iron. It is a solid, sturdy structure built of Savannah gray brick. The walls are twelve inches thick. The heart pine floors are original. Around 1910, when Carl Olaf Svendsen was head lighthouse keeper, the dwelling became two apartments by removing the central staircase. A new exterior staircase, stoop, and door gave access to the second floor. In 1975, alterations removed the steps and stoop, re-bricked the doorway, and rebuilt the central stairway.

The lighthouse keeper’s house served as their residence from 1872 until 1950. Following the complete automation of the lighthouse in 1953, the last lighthouse keeper, David O’Hagan, retired. The U.S. Government then used the dwelling as office space. In 1960 to the Bureau of Commercial Fisheries, Department of the Interior, Fish and Wildlife Service received the house as a gift.

In 2004, the deed to the lighthouse went to the Coastal Georgia Historical Society under the Lighthouse Preservation Act.