Jekyll Island is located off the coast of the U.S. state of Georgia, in Glynn County. 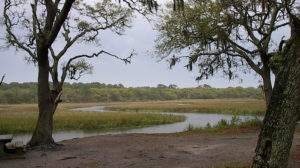 It is one of the Sea Islands and one of the Golden Isles of Georgia barrier islands. The State of Georgia owns the Island. A self-sustaining, self-governing body runs the operations of Jekyll Island.

Indigenous peoples of the region used the region seasonally. When Europeans first reached the area, the English of the Province of Carolina and their native allies killed and forced the Guale and the Mocama to leave.

During the British colonial period, the Brits developed Plantations on the island. A few structures still stand today. They used tabby, a coastal building material of crushed oyster shells for construction of dwellings and other structures. The island was developed in the late 19th and early 20th centuries. During World War II by order of the US government ordered an evacuation of Jekyll Island. In 1947 the state of Georgia acquired all the property, for security and preservation.

A popular tourist destination, the Jekyll Island has beaches frequented by vacationers.

Guided tours of the Landmark Historic District are available. Bike trails, walks along the beaches and sandbars, and Summer Waves, a water park, are among the active attractions. The historic district features numerous impressive and ambitious buildings from the late nineteenth and early twentieth centuries.

The island is also full of wildlife, consisting of many different mammals, reptiles, and birds living and breeding in the island’s inland salt marshes. In 2018, Architectural Digest named Jekyll Island one of the 50 most beautiful small towns in America.