Today, wood storks feed and gracefully soar over marshes during low tide on our Island. 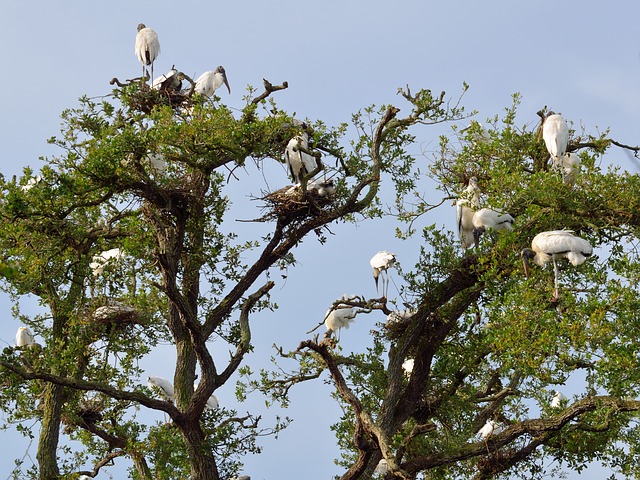 This once-endangered species is currently making a great comeback along the Southeast coast. Wood storks are found from Georgia to South America. Prior to the 1980s, they primarily nested in Florida during the late winter and spring. The birds migrated into our marshlands as a post-breeding foraging area. Human development in their natural nesting habitat in Florida has moved them further north into Georgia for all stages of life.

Wood storks are the largest wading bird in the US. They stand at almost four feet tall with an impressive five-foot wing span. These birds are all white with black tips on their wings and tail. They have a buzzard-like face with a dark grey neck and head. Wood storks have a long, thick black bill used for tactile foraging. They tend to gather in colonies, whether feeding or foraging in shallow water or low tidal marshes.

Wood storks make their nests out of live willow sprigs and then cement them together with Spanish moss and guano. Breeding wood storks can be identified by their pink feet. Females will lay between three and five eggs. Both the male and female will incubate the eggs for 30 days.

The hatchlings stay with their parents for about 55 days before fledging. On average, two of the young reach adulthood and start breeding between three and four years old. The placement of wood stork nests in standing water is very important to the survival of the young. Mammals are a common predator of eggs and young, and the standing water prevents them from accessing the nests.

They dip their open beaks into shallow water and feel around for fish and crustaceans. Due to this type of feeding, they prefer shallow water no deeper than 20 inches, which is why they are commonly seen foraging in estuaries at low tide. While wading in the water and dipping their beaks, the wood storks will use their feet to rustle animals out of the soft mud. On average, a wood stork will consume up to one pound of fish a day. During breeding season, a pair of wood storks can forage 400 pounds of food for themselves and their growing young.