F.J. Torras Causeway is named for Fernando Joseph Torras (1885–1952), the causeway’s main engineer who served as Brunswick’s city manager for over 30 years. 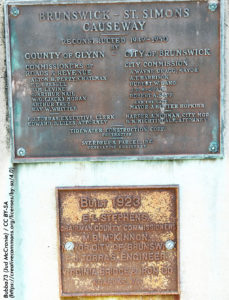 Prior to the construction of the Torras Causeway, the only way to reach St. Simons Island was by a ferry that left from a dock in Brunswick and arrived at a pier on the southern tip of the island. The trip to St. Simons took about an hour by ferry, and the people of Brunswick spoke for years about building a causeway for automobiles. An attempt was once made a few miles north of Brunswick, but it was abandoned. Another survey had been made which would have extended Cypress Mill Rd. in Brunswick across the marsh, making contact with St. Simons at present day Fort Frederica National Monument. But the task of building a causeway to St. Simons was deemed to be impossible.

Fernando Torras, graduated as an engineer from Georgia Tech. After his schooling, he built rail lines, bridges, and roads in the jungles of South America, took a keen interest in the idea of a causeway. He conducted a survey of the marshy landscape at the request of Brunswick mayor Malcolm B. McKinnon and determined the best possible route. Torras served as the Chief Engineer on the project. The causeway was completed in 1924 after 13 months of work at a cost of more than $418,000.

The new causeway was an immediate sensation for all of Glynn County.

On the day that it opened, 5,500 cars crossed over to St. Simons, and 7,500 people were fed a fish dinner under some live oak trees. There was also a parade on Gloucester St. in Brunswick with floats that celebrated the opening of the causeway.

As Fernando Torras was the main catalyst to imagine and create the causeway, it was in January 1953 (a year after he died and 29 years after it opened) that the causeway was named for him.

A $0.25 toll was once collected from the drawbridge span on one of the two lift-span bridges on the causeway. A green tin toll collectors booth hung out over the water and cars would either stop and pay the toll to the attendant or be waved through if they displayed a round yearly sticker on their windshield. A new multi-lane toll plaza was constructed in the early 80’s about halfway onto the causeway and toll was increased to $0.35. The toll was removed in 2003,  but part of the toll booth remained in place to serve as a security post during the 30th G8 Summit held on Sea Island, GA in 2004, which is also reached by the Torras Causeway. The structure was entirely removed in 2006. The only remaining landmark is a tall street light which once illuminated the toll plaza area.

Aside from being the only road to and from St. Simons, Torras Causeway provides several opportunities for recreation. A paved biking/walking path runs the 4.2 mile length of the causeway. The path is a wonderful way to view the expansive salt marsh, rivers, and wildlife of the “Marshes of Glynn”. Fishing and crabbing from several of the bridges is also a common pastime for locals.

Construction of a concrete center median barrier began in March 2011. Local and state officials had expressed the need for a barrier due to the number of head-on collisions that were occurring on the causeway in recent years, the most recent in March 2008. The need, purpose, design, and cost of the concrete barrier was a controversial issue among Glynn county residents and county officials. The barrier has openings to allow turtles to cross the causeway. It was completed by the end of 2011.