Search
HomeBlog BeachesStar Manatee Back with a Splash

When she’s ready to migrate, it’s best not to get in her way.

The female nicknamed Jno swam from Miami to Savannah in 30 days, an Intracoastal Waterway trip covering some 500 miles from March 3 to April 2, according to satellite transmitter data tracked by Clearwater Marine Aquarium. 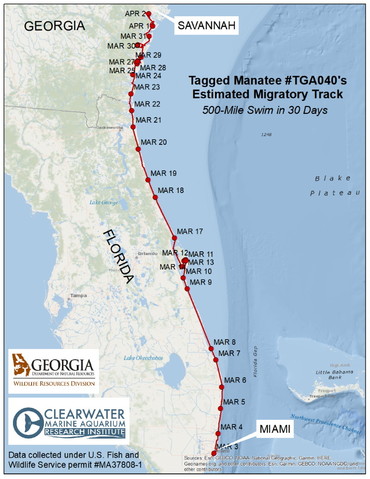 Not that the big swim was Jno’s first.

After being videoed stranded on a berm at Savannah National Wildlife Refuge and saved with the help of a dozer Oct. 1, she covered more than 450 miles to Miami’s Biscayne Bay in 23 days last November.

So the relatively fast return this spring wasn’t shocking. But it did provide welcomed information on the long-range northward migrations of manatees. Researchers are also curious to see where Jno ends up.

Moving frequently between estuaries, male manatees usually have a larger summer range than females, said DNR senior wildlife biologist Clay George. Jno was rescued and first monitored – officially as TGA040 – near Savannah in the fall. At that point, though, she could already have been swimming south.

“We expect this female is on the way to wherever her summer range is,” George said.

Late last week, she was near Savannah and continuing to make her way north.

Fortunately, George and DNR’s Trip Kolkmeyer caught up with her and swapped out the old tag for a new one, giving scientists a better shot at shadowing Jno to her summer home.

BOATERS: MANATEE WATCH IS ON

With coastal waters warming earlier than usual this late-winter and early spring, manatees have shown up sooner along Georgia’s coast. We encourage boaters to:

Practice safe boating for manatees by slowing down near the shoreline and when in shallow waters. On seeing a manatee, give them space, do not pursue them and never give them food or water.
Boat strikes are a leading cause of manatee injuries and deaths. Boaters who hit one should stand by and immediately call DNR at 800-2-SAVE-ME (800-272-8363).