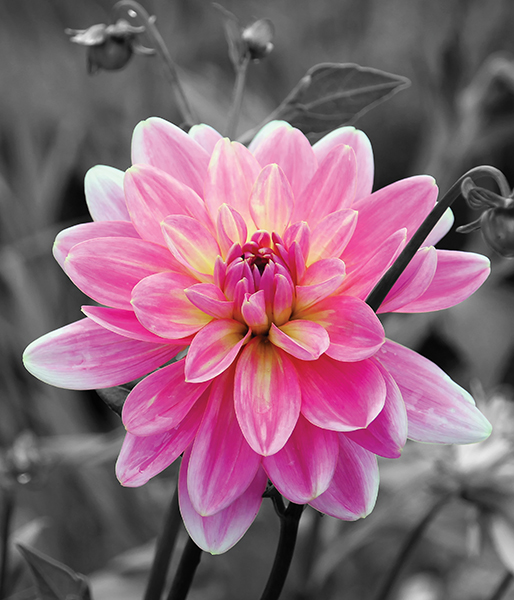 The spring morning was quiet, save the occasional birdsong or burst of chilly wind that raised the hood on the back of Firm’s windbreaker.

He stood alone, resting his weight on the handle of his garden hoe, in no particular hurry to turn more earth. Firm gazed up at the contrails of a distant jetliner. He didn’t wonder where it was going, though. No, he didn’t have much need for that, seeing as he’d never been west of the Savannah River himself and certainly not too much further east of the Port Royal Sound than a sandbar or two.

He just watched as the plane inched its way across the pale blue spring sky, his attention finally broken by a car passing by. He nodded his head and, as if remembering his task, quickly proceeded with his stiff and robotic movements, hacking and scrapping at the dirt before him.

“Firm” a voice called out from around the corner of the house.

“Firm, where are you?” He instinctively stopped his work and began walking towards the voice. “Yes ma’am,” he responded, “just round da corner here.”

Mrs. Ann stood before him in a London Fog coat, with a plaid scarf around her head, tied at her chin. She was a bundle of expectation and energy, carrying on one arm a plastic grocery bag and cradling flowers wrapped in cellophane with the other.

“I need your help,” she said with enthusiasm as she handed him the flowers. “Yes, ma’am, I see you do,” he replied and followed her to the garage.

A large white Cadillac, covered with a thin layer of yellow green pollen, idled in the driveway. The driver’s door was wide open. Peering in, Firm could see plastic shopping bags lining the back seat.

“All those need to go to the kitchen,” Ann said, “and the trunk needs to be unloaded, too.” Firm remarked to himself that today was one of Mrs. Ann’s good days.

He leaned in to turn off the car before fiddling with the keys at the lock to the trunk.

Finally, he settled on the square key. Bags of mulch and flats of colorful spring flowers lay tossed about in the cavernous trunk. It appeared Ann had taken a turn or two quite hard. Everyone worried about her driving except Ann.

Carefully, he reached in and pulled out some of the more damaged flowers, straightening them only to see their broken stems and leaves again fall limp. He set the flowers to the side and went back to the grocery bags. He noticed Ann laboring back and forth from the car to the house.

“Mrs. Ann,” he called out, “set them bags down.” But Ann paid him no mind. “Look here,” he fussed, walking towards her, his large hands reaching for the bags. “Mr. Tom will be cross. You know you shouldn’t carry on like that.” Ann stopped and turned. She glared at him with a crinkled nose and pursed lips. Firm knew he’d angered her. The two things she didn’t like were to be under one’s thumb or under another’s care. Her glare said enough. The two labored on in silence together, but with Firm taking more than his share, until all the bags were in the house. The kitchen was dark and the house so still, save the rustling of plastic bags, that the air felt heavy with a dusty longing.

Firm replaced last week’s bouquet with the fresh bundle and then stepped towards the small knotty pine den.

“Afta’noon, sir,” he called out in the direction of a raised newspaper. There was no response. He repeated his salutation, only much louder. The paper came down quickly, as if its reader were suddenly startled.

Mr. Tom patted his chest and tummy for his glasses and raised them and his eyes to Firm. “Oh, hello,” he chuckled upon realizing it was Firm. “I’ve gotten lost again in my papers.”

Firm stepped back outside. The air was cooler than he remembered, perhaps due to the stuffiness of the house. While the air smelled of rain before a storm, there were no threatening clouds to be seen. He walked back to the flower bed, stretched his arms out over his head and resumed his work preparing the flower beds for planting. He whistled now, refocused and intent to complete the work. Beads of sweat formed on his forehead.

He bent down and took a handful of dirt in his hand. He squeezed and rolled it over, taking in a deep breath of it before crumbling and letting it fall to the ground through his fingers. Wiping his hand on his pants, he smiled. He loved spring. The smells and the hints of new life that crept forward with each warm day. Firm loved to create new things with his hands and imagination.

He was older now, much older, but could still shape and tend to beautiful gardens.

He couldn’t compete with the larger companies that swarmed over a yard like locust, but he still had a handful of clients, aging clients, that appreciated his slower touch and help with incidentals. It made him feel like a man. It reminded him of his use and his sense of belonging.

Time is a strange companion, especially when working outdoors; it seems to slip away before you’ve made its full acquaintance. The sun had begun to wane in the afternoon sky when Ann appeared on the stoop of the house. Her voice startled Firm, who had lost track of time.

He was on his hands and knees digging and filling in small holes for the flats of flowers when she called.

“I’ll help spread the straw,” she declared. “Need to finish. The paper says it will rain tonight.” Firm squinted at her silhouette. It wasn’t until he stood up that he could tell she had donned her khakis and Keds and was ready to lend a hand.

For as many years as he had helped tend to their yard, she always came out and helped. “Yes, ma’am,” he dutifully responded. He walked over and helped her across the uneven yard. “I’ll tell Tommy to call someone to smooth out that dirt,” she told him. “Yes, ma’am, but it’s the moles that do it.” She fussed, “Well, I am not getting another cat.” He chuckled, remembering the tabby she fed one spring to kill moles. She ended up with moles and a bunch of stray cats. He ended up having to transport about a dozen cats to a lady near Beaufort. Hijinks followed Mrs. Ann. Firm liked that about her.

Each took a handful and with a careful eye spread it over the dirt and flowers. “Pretty funny the two of us,” Ann mused as she worked. “Yes, ma’am,” Firm responded as he grabbed two more handfuls of straw.

“How long we been at it?” she quizzed. Firm thought and thought. “I reckon, goin’ on 40 years.” Ann laughed. “No, no,” she cackled. “I meant this afternoon?” Firm blushed, but she couldn’t tell. “You believe we’ve seen the last frost?” he asked to change the subject.

Ann stopped to consider. “Well, that’s what Tommy read in his papers.” Firm furled his brow and nodded. Ann reassured, “the spring bulbs are up in the back too, and the azaleas will bloom any day now.” She stopped and picked up a half-pallet for examination. “I think we’re safe to put these little ones in the ground.” Ann smiled and resumed her work.

She appreciated the life and color he helped coax out of her soil each season. With Tom’s knees and the remainder of their friends either passed or living off in retirement communities, these chats with Firm were special to her. The spring gardens they tended brought forth new life in an otherwise diminishing season.

“What shall we do tomorrow?” she asked inquisitively.

“Oh, well, I’ve got to carry my niece to the doctor,” Firm reminded before quickly adding, “but I will be back on Friday to help with the watering and groceries.” He too, liked the companionship and the work.

Firm tossed the last rake and bag of trash in his beat-up F-150 and walked briskly to the stoop where Ann waited.

“Rain will do them good,” she said, arms crossed, gazing up at the wind whipping through the pines. Firm nodded in agreement. Another car pulled in front of the house. A young woman bounded up to the home, clipboard over her head, stethoscope bouncing to and fro.

“Evening, Mrs. Ann,” she said, smiling. “And good evening, Firm,” she teased, squeezing his arm. “Evening,” they said in unison. “I see y’all are making a pretty flower garden today,” she said, looking at the spring beds piled up with straw. “In a few weeks you will love all that color, Mrs. Ann,” she said tenderly while stroking her arm.

Firm noticed Mrs. Ann’s face sour. He knew she didn’t like to be patronized. Ann winked at Firm. “See you Friday then,” she confirmed, adding: “You might need to drink some good whisky before moving that wood pile out back.” Firm smiled as the young nurse’s eyes widened. Firm admired her defiance. He looked forward to what lay in store on Friday.