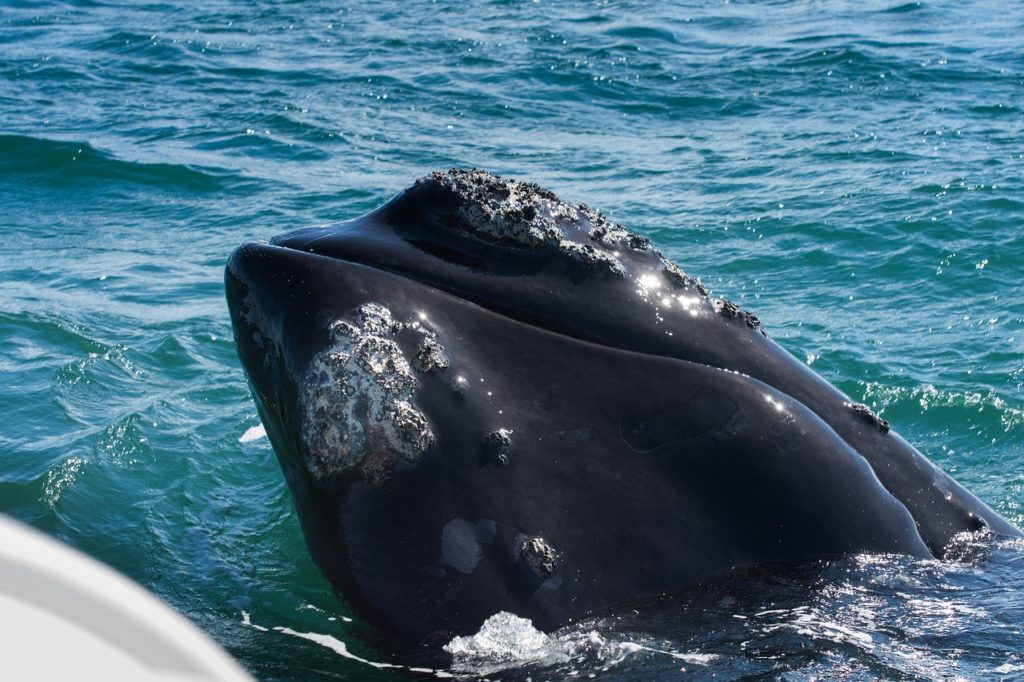 The population declined from an estimated 477 whales in 2011 to 366 in January 2019. There are fewer than 100 breeding females left. (Adult females drive population growth.) And in the past 10 years the number of calves per year has dropped to half the annual average – 24 – born the previous decade. Since 2017, 32 dead right whales emerged in the U.S. and Canada. The leading cause: “human interaction” from entanglements in commercial fishing rope or vessel strikes. Another 13 whales still alive have been documented with serious injuries from entanglements or strikes. Deaths are up, calving is down. “The math is pretty simple,” said Clay George, a DNR senior wildlife biologist.

Shipping traffic remains thick along the Atlantic seaboard. Millions of lobster and crab traps are set in New England and Canadian waters each year. Warming oceans have commercial fishers moving to deeper water, increasing the risk of whale entanglements. Stronger fishing rope is worsening whale injuries. Meanwhile, the life span of adult female right whales has shrunk and intervals between calving have increased. The male/female ratio has grown to almost 2-to-1.

A proposed federal rule to reduce entanglements is in the works, spurred in part by a lawsuit. (Amidst the legal wrangling, the Gulf of Maine lobster fishery saw its sustainable certification suspended in August.) Massachusetts is holding hearings on reducing entanglement risks. Development of  “ropeless” fishing systems that either eliminate buoy ropes or keep them out of the water column continues.

What DNR is doing:

The agency is again teaming with NOAA, Clearwater Marine Aquarium and the Florida Fish and Wildlife Conservation Commission to monitor right whales this winter by plane and boat. (The only known calving area for right whales is off the coast of Georgia and north Florida.) Calves will be biopsied for genetics research. George and staff will also help in any disentanglement efforts.

What you can do:

Inform yourself, including about sustainable seafood. Support right whale conservation in Georgia. When boating November-March, be on the lookout and slow down for right whales. Stay at least 500 yards away and report sightings at 877-WHALE-HELP (877-942-5343).

“I’m still optimistic,” George said. “In the 2000s, we saw how quickly the population grows if we manage the mortality rate and females have lots of calves. If we can slow ships down in the right places, and remove heavy fishing rope from their habitat, the whales would have a fighting chance.”